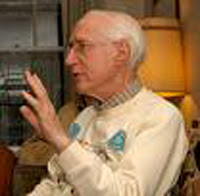 Father George H. Tavard, a priest of the Augustinians of the Assumption, died suddenly on 13 August 2007 in a Paris airport; he had been visiting relatives and friends in France and was returning to Boston, where he resided.

Tavard was born in Nancy, France, and studied at the Grand Seminaire de Nancy and the Catholic Faculties of Lyon, where he received a doctorate in theology. Ordained in 1947, he taught theology at Capenor House in Surrey, England, before coming to the United States, where he taught at Assumption College (Worcester, Massachusetts), Mount Mercy College (now Carlow University, Pittsburgh), Pennsylvania State University and the Methodist Theological School in Ohio, from which he retired in 1990 as Professor Emeritus. In addition, he served as visiting professor at a number of institutions, including The Catholic University of America and Princeton Theological Seminary.

During the Second Vatican Council (1862-65), Tavard was a peritus (expert) as well as a consultant to the Pontifical Secretariat for Promoting Christian Unity. After the Council, he worked extensively in the field of ecumenism, as a member of the Anglican-Roman Catholic International Conversations, the Anglican-Roman Catholic Conversations in the United States and the Lutheran-Catholic Dialogue in the United States. Last year he published his reflections on his decades-long ecumenical activity in Vatican II and the Ecumenical Way (Marquette University Press, 2006).

Tavard was the author of dozens of books both in French and in English, including The Catholic Approach to Protestantism, Holy Writ or Holy Church, Paul Tillich and the Christian Message, The Church Tomorrow, Woman in Christian Tradition and Juana Inés de la Cruz and the Theology of Beauty. The Washington Theological Consortium presented its Ecumenism Award to Tavard, along with Rev. Joseph Fitzmyer, SJ and Dr. John H. Reumann, for their outstanding theological contribution to the Lutheran-Catholic Dialogue, which led to the milestone 1999 Lutheran-Roman Catholic “Joint Declaration on Justification.”